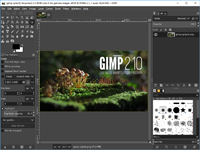 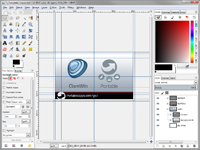 As seen in the screenshot, the GIMP Portable Photoshop Layout changes the layout of the right-hand toolbox and enables GIMP's single window mode to more closely approximate the layout of Adobe Photoshop, making GIMP easier to use for users already familiar with that layout.