PortableApps.com is proud to announce the release of RawTherapee Portable 5.1-5.0. RawTherapee is an advanced raw image processor with a wide range of powerful features for processing the raw photos from your digital camera. And it's packaged as a portable app so you can use it on the go. Both the 32-bit and 64-bit versions of the app are packaged together and the right one is automatically used for best performance, though the different versions may have slightly different version numbers. It's packaged in PortableApps.com Format so it can easily integrate with the PortableApps.com Platform. And it's open source and completely free. 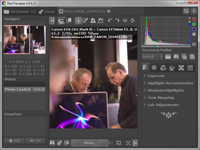 RawTherapee boasts a wide range of features letting you get the most from your raw photos including modern and traditional demosaicing algorithms, advanced color handling, enhanced exposure and tonality tools, multiple denoising methods, and several tools to enhance details. It uses multi-thread algorithms for high performance and works best on 64-bit machines, though it should work fine on most 32-bit machines with proper memory management. Batch processing is also available. A wide variety of digital cameras are supported including almost all DSLRs and even some medium format bodies. The interface is configurable into various layouts including: multiple tabs, single tab with filmstrip, vertical tab with filmstrip. RawTherapee (as well as the RawTherapee Portable launcher and installer) is free and open source, meaning you can use it free of charge, wherever you like on whatever hardware you like, as long as you abide by the GPL license.