Simple Sudoku is packaged for portable use with permission from the publisher. 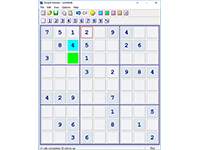 Simple Sudoku makes high quality puzzles that are symmetrical, have a single solution, and do not require trial & error to solve. The user can also choose between five levels of complexity - from Easy to Extreme. Each puzzle is generated randomly so there is an almost limitless selection. Not only does Simple Sudoku make challenging puzzles, it also provides tools to help solve them - removing the drudgery but not the fun. Keeping track of possible values for blank cells (candidates), providing filters and color markers are just some of the tools available to make solving even those really tricky puzzles possible. Also, if you ever get really stuck, Simple Sudoku can get you started again with a discreet hint (without giving everything away).