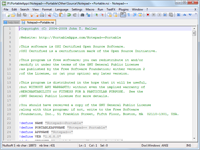 Notepad++ Portable is a full-featured text editor with features like: