A new version of CDex Portable has been released. CDex is an audio extractor that can extract data directly from an audio CD. It's packaged in PortableApps.com Format so it can easily integrate with the PortableApps.com Platform. It's free for personal and business use. 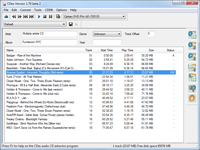 The local version installer uses what is considered a malicious bundleware add-on that will be detected as such by several antivirus engines. The portable version downloads the local version installer but extracts the files from it without running the installer, protecting you from bundleware. The download may trigger a detection in your antivirus, however. The files extracted by the portable release are clean and a scan of them is linked to the from portable version's homepage.