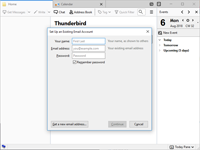 GPG, in conjunction with the Enigmail extension, allows you to sign and encrypt your email. Learn more about GPG and Mozilla Thunderbird, Portable Edition.