A new version of CrystalDiskInfo Portable has been released. CrystalDiskInfo monitors HDD/SSD health status and temperature, and does all the usual monitoring/graphing of S.M.A.R.T. information. It also tells you how many times the hard disk has been turned on and how many hours it's been on for. It's packaged in PortableApps.com Format so it can easily integrate with the PortableApps.com Platform. And it's open source and completely free. 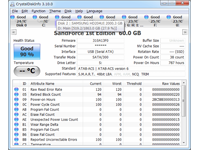 CrystalDiskInfo is a HDD/SSD utility which supports S.M.A.R.T. It supports a part of external USB disks, monitoring health status and temperature, graph of S.M.A.R.T. information, control AAM/APM settings and more.