A new version of Lucas Chess Portable has been released. Lucas Chess is a chess game with a chess trainer built in designed to help you beat increasingly difficult opponents with a limited number of hints. It's packaged in PortableApps.com Format so it can easily integrate with the PortableApps.com Platform. And it's open source and completely free. 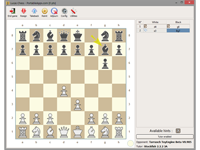 The aim is to play chess against the computer with increasing levels of difficulty and with a limited number of hints that are given by a chess tutor. Also included are thousands of training positions such as different types of endgames, tactical combinations and chess problems (mate in 2,3,4 and more). The computer uses different chess programs (so-called chess engines) of various strength. The user starts playing against the weakest engine at first. Initially the engine plays with limited strength but as the user wins more games the engine will be given more calculation time and its strength will improve. Eventually the engine will reach its maximum level of strength and if the user continues to win he will be passed to the next stronger engine and so forth.