A new version of SuperTuxKart Portable has been released. SuperTuxKart is a Free 3d kart racing game. It's more about being fun than being realistic. You can play with up to 4 friends on one PC, racing against each other or just try to beat the computer. It's packaged in PortableApps.com Format so it can easily integrate with the PortableApps.com Platform. And it's open source and completely free. 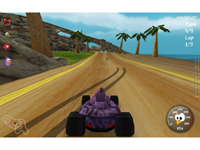 See the great lighthouse or drive through the sand and visit the pyramids. Race under water or in space, watching the stars passing by. Have some rest under the palms on the beach (watching the other karts overtaking you :) ). But don't fall into the volcano. You can do a single race against other karts, compete in one of several Grand Prix, or try to beat the high score in time trials on your own.