A new version of Wizznic Portable has been released. Wizznic is a brick-matching pizzle game with a great soundtrack. It's packaged in PortableApps.com Format so it can easily integrate with the PortableApps.com Platform. And it's open source and completely free. 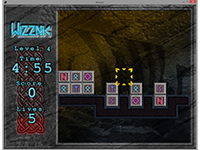 Wizznic is a brick-matching puzzle-game, an improved version of Puzznic. The challenge is to clear each level of bricks by moving the bricks next to each other, this sounds a lot easier than it is. The bricks are heavy, so you can only push them, not lift them up.