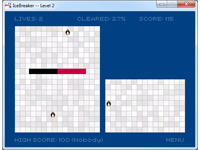 From the publisher: "So, uh, there's a bunch of penguins on an iceberg in Antarctica. You have been selected to catch them so they can be shipped to Finland, where they are essential to a secret plot for world domination. In order to trap the penguins, you'll need to break the iceberg into small chunks. (They're afraid of water, for no apparent reason. Ah well. "The Matrix" had more plot holes than this, and it still was a hit.) You do this by melting lines in the ice with Special High-Tech GNU Tools. If a penguin hits a line in progress, however, it vanishes with a loud noise, and you lose a life. (Yes, a life. This story is really breaking down, isn't it? But never fear -- I'll keep going until it's completely dead.) Once 80% or more of the iceberg is gone, the remaining chunks are small enough for shipping. Of course, if you manage to get rid of more than that, you'll save on postage, thus earning you exponential amounts of Geek Cred (a.k.a. "score"). After you ship off one batch of penguins, it's time to move on to the next. Each subsequent 'berg will have one more penguin, and you'll have one more life. This will continue until you lose, or until you exceed level one hundred or so, which Ain't Gonna Happen. Of course, this is an urgent mission, so you'll be penalized if you're slow -- every second or so, your score drops down by one. But don't worry, I'm not completely cruel, so any points you earn on one level are yours to keep forever, no matter how long you take on subsequent icebergs. As far as I can tell, this makes no narrative sense whatsoever, so at this point, I declare the backstory / game metaphor completely collapsed. Just go play."