A new version of The Legend of Edgar Portable has been released. The Legend of Edgar is a platform game, not unlike those found on the Amiga and SNES. Edgar must battle his way across the world, solving puzzles and defeating powerful enemies to achieve his quest. It's packaged in PortableApps.com Format so it can easily integrate with the PortableApps.com Platform. And it's open source and completely free. 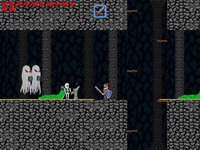 When Edgar's father fails to return home after venturing out one dark and stormy night, Edgar fears the worst: he has been captured by the evil sorceror who lives in a fortress beyond the forbidden swamp. Donning his armour, Edgar sets off to rescue him, but his quest will not be easy. The Legend of Edgar features large levels with different environments, a variety of weapons, a persistent game world that can be travelled through, boss battles, lots of sound effects and music tracks, joypad support with configurable controls, and configurable keyboard support.

Learn more about The Legend of Edgar...