PortableApps.com is proud to announce the release of Mozilla Firefox®, Portable Edition Nightly 102. It's the Nightly channel of the popular Firefox web browser so you can test upcoming features without impacting your local or other portable installs. It's packaged in PortableApps.com Format so it can easily integrate with the PortableApps.com Platform. And, as always, it's open source and completely free. 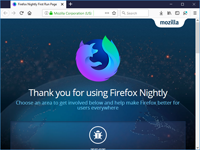 There was a build error with this original release. A reupload has fixed it. Apologies for the inconvenience.