A new version of WinObj Portable has been released. WinObj is a tool to access and display information on the NT Object Manager's namespace. It's packaged in PortableApps.com Format so it can easily integrate with the PortableApps.com Platform. WinObj is freeware for business and personal use. 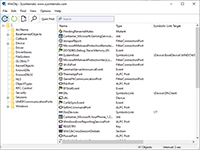 From the publisher: "WinObj is a must-have tool if you are a system administrator concerned about security, a developer tracking down object-related problems, or just curious about the Object Manager namespace. WinObj is a 32-bit Windows NT program that uses the native Windows NT API (provided by NTDLL.DLL) to access and display information on the NT Object Manager's namespace. Winobj may seem similar to the Microsoft SDK's program of the same name, but the SDK version suffers from numerous significant bugs that prevent it from displaying accurate information (e.g. its handle and reference counting information are totally broken). In addition, our WinObj understands many more object types. Finally, Version 3.0 of our WinObj has user-interface enhancements (including a dark theme), knows how to open device objects, provides dynamic updates when objects are created/destroyed, and allows searching and filtering."