FontViewOK is packaged with permission from the publisher 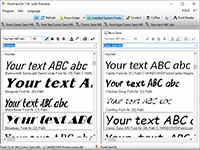 FontViewOK Portable is font visualization and comparison tool letting you see and compare the fonts installed on the local system as well as in directories you select. You can enter custom text and see how it appears in all available fonts.