A new version of Draw.io Portable has been released. Draw.io is a full featured diagramming tool. It's packaged in PortableApps.com Format so it can easily integrate with the PortableApps.com Platform. And it's open source and completely free.

Draw.io is a trademark of JGraph Ltd and used with permission. Support for this package is not provided by the Draw.io team. 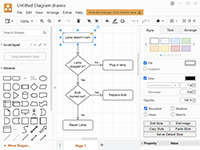 drawio-desktop is a diagramming and whiteboarding desktop app based on Electron that wraps the core draw.io editor. It has built in templates for Class Diagrams, Flowcharts, Org Charts, Swimlane Diagrams, Sequence Diagrams, Kanban Boards, and more. Learn more about Draw.io...