A new version of PortableApps.com AppCompactor has been released. It allows you to easily compress applications to decrease size on disk and increase performance when running from slow media like flash drives without affecting functionality. Though intended for developers, some advanced end users may also find it useful. This release updates to the latest version of 7-Zip. Note that we no longer use AppCompactor on official uses due to increased false positives in various antivirus products. It's packaged as a portable app, so you can shrink your apps on the go. It's packaged in PortableApps.com Format so it can easily integrate with the PortableApps.com Platform. And it's open source and completely free. 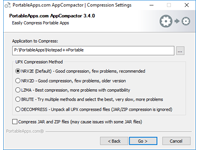 PortableApps.com AppCompactor allows you to easily compress application to decrease size on disk and increase performance when running from a slow media (like flash drives). It features: