A new version of Litecoin Core Portable has been released. It's a peer-to-peer cryptocurrency complimentary to Bitcoin. It's packaged in PortableApps.com Format so it can easily integrate with the PortableApps.com Platform. And it's open source and completely free. 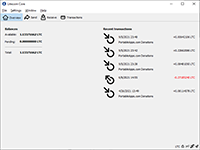 Litecoin is a peer-to-peer Internet currency that enables instant, near-zero cost payments to anyone in the world. Litecoin is an open source, global payment network that is fully decentralized without any central authorities. Mathematics secures the network and empowers individuals to control their own finances. Litecoin features faster transaction confirmation times and improved storage efficiency than the leading math-based currency. With substantial industry support, trade volume and liquidity, Litecoin is a proven medium of commerce complementary to Bitcoin.

Litecoin Blockchain Download - As part of the first run of Litecoin Core Portable, you'll be asked if you'd like to run a pruned node. This will use about 4.5GB of space on your device instead of the 55GB+ required when running a full node. You'll also be given the opportunity to download the current Litecoin blockchain from blockchains.download, a service we run, allowing you to get started with Litecoin even faster. The blockchain can also be downloaded for use with local Litecoin installs.