A new version of Don't Sleep Portable has been released by PortableApps.com. Don't Sleep is a utility to prevent a PC from sleeping based on time and battery levels. It's packaged as a portable app so you download on the go and it's in PortableApps.com Format so it can easily integrate with the PortableApps.com Platform. It's released as freeware for personal and business use.

Don't Sleep is packaged with permission from the publisher 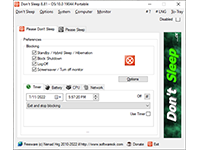 Don't Sleep Portable is a utility to prevent a PC from sleeping based on time and battery levels. It also prevents login off the computer, and the deactivation of the monitor or activation of the screen saver.