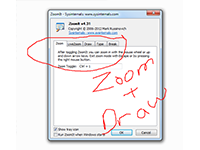 ZoomIt is a screen zoom and annotation tool for technical presentations that include application demonstrations. ZoomIt runs unobtrusively in the tray and activates with customizable hotkeys to zoom in on an area of the screen, move around while zoomed, and draw on the zoomed image. ZoomIt works on all versions of Windows and you can use pen input for ZoomIt drawing on tablet PCs.