FastStone Image Viewer is packaged with permission from FastStone Soft 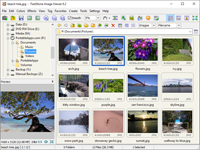 Thanks for your work on this, Mike! I updated the app to the full name in appinfo.ini, added an installer.ini to preserve settings on a crash and then upgrade, and added SupportsUNC to the launcher INI.

Is It Based on the Creator's Portable Version

This one repackages the publisher's portable app in PortableApps.com Format to allow for automatic installs, updates, and backups with the platform

Many thanks for making this app part of the PortableApps collection.
I've been using it for years and IMO it's the best Windows Image Viewer/Editor etc etc around.