PortableApps.com is proud to announce the release of Mozilla Firefox®, Portable Edition 56.0.1. It's the Mozilla Firefox browser bundled with a PortableApps.com launcher as a portable app, so you can take your browser, bookmarks, settings and extensions on the go. And it's open source and completely free. Firefox Portable is a dual-mode 32-bit and 64-bit app, ensuring Firefox runs as fast as possible on every PC. It's available for immediate download and bundled on the World's Best Flash Drive: The PortableApps.com Carbide as well as the fast and affordable PortableApps.com Companion. 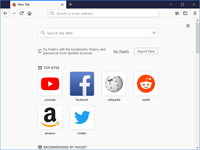