VLC Media Player Portable 2.2.8 has been released. VLC Portable is the popular VLC media player packaged as a portable app, so you can take your audio and video files along with everything you need to play them on the go. This version fixes a critical security issue in VLC. It's packaged in PortableApps.com Format so it can easily integrate with the PortableApps.com Platform. And it's open source and completely free. 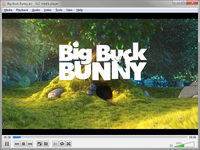