A new version of TinyTask Portable has been released. TinyTask provides quick and easy automation by recording and playing back mouse movements and keystrokes. TinyTask is freeware for personal use. It's packaged in PortableApps.com Format so it can easily integrate with the PortableApps.com Platform. And it's open source and completely free.

TinyTask is packaged for portable use with permission from Vista Software. 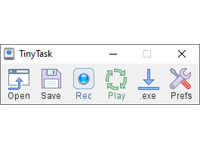 TinyTask allows for recording and playback of mouse movements and keyboard entries. Macros can be saved for later use, played back and even compiled into standalone EXEs.