A new version of XMPlay Portable has been released. XMPlay is a full-featured audio player and portable audio library with support for dozens of audio formats. It's packaged in PortableApps.com Format so it can easily integrate with the PortableApps.com Platform. It's freeware for personal and business use.

XMPlay is packaged with permission from unforeseen developments 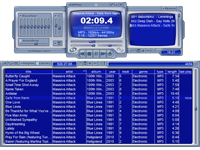