Audacity 2.4.0 has been pulled by the publisher due to a serious bug 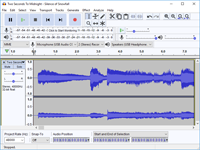 Audacity is an easy-to-use audio editor and recorder. You can use it to:

From the Audacity site: We're currently looking into a serious bug with 2.4.0 and have paused release of it. They have reverted to 2.3.3 for the time being