A new version of Inkscape Portable has been released. Inkscape Portable is an open source scalable vector graphics editor packaged as a portable app, so you can do your graphics work on the go. It has all the same great features of Inkscape including markers, clones, alpha blending and has a streamlined interface. It's packaged in PortableApps.com Format so it can easily integrate with the PortableApps.com Platform. And it's open source and completely free.

Inkscape Portable is made available in conjunction with the Inkscape team. 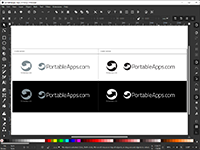 Revision 2 fixes an issue where the original package was not signed and the hashes did not match. Our apologies for the inconvenience.

The link has been corrected, thanks for the advisement.

Sorry friends, but it seems that this release isn't listed in the sourceforge archive..
It's not that I need it, just that browsing the archive made me notice it. Also there is a "PortableApps.com Installer" in the location of the ""PortableApps.com Launcher""

We don't host Inkscape, the publisher does, so it's not in our SourceForge archive. The SF archive is only our first-party stuff.

I fixed the installer location, thanks.

Hmm.. Thanks for the

Hmm.. Thanks for the clarification