A new version of WinMerge 2011 Portable has been released. WinMerge 2011 is a comparison and differencing tool with support for syntax highlighting and patch file generation. It's packaged in PortableApps.com Format so it can easily integrate with the PortableApps.com Platform. And it's open source and completely free. 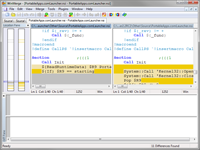 WinMerge 2011 is an Open Source visual text file differencing and merging tool. It is highly useful for determing what has changed between project versions, and then merging changes between versions. It features visual differencing and merging of text files, a flexible editor with syntax highlighting, line numbers and word-wrap and handles DOS, UNIX and MAC text file formats. It also includes full support for archives with the bundled 7-Zip plugin. The WinMerge 2011 branch is a continuation of the older WinMerge release. This package includes both the 32-bit and 64-bit versions for maximum performance. Learn more about WinMerge 2011...