CPU-Z is packaged with permission from the publisher 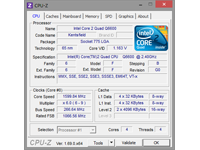 Hello. Any particular reason to why CPU-Z .paf file doesn't have Digital Signature like other apps?

It's closed source freeware. We generally have only ever signed our open source work or open source installers that download freeware with some specific exceptions for a couple publishers.

The platform will automatically verify it based on its hash, of course.

Thanks for letting me know

Thanks for letting me know John.