Dogecoin Core Portable has been released. It's cryptocurrency like bitcoin preferred by shibes. It's packaged in PortableApps.com Format so it can easily integrate with the PortableApps.com Platform. And it's open source and completely free. 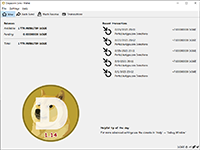 Dogecoin is a cryptocurrency like Bitcoin, although it does not use SHA256 as its proof of work (POW). Taking development cues from Tenebrix and Litecoin, Dogecoin currently employs a simplified variant of scrypt. Dogecoin is preferred by shibes around the world.

Dogecoin Blockchain Download - As part of the first run of Dogecoin Core Portable, you'll be asked if you'd like to run a pruned node. This will use about 4.4GB of space on your device instead of the 52GB+ required when running a full node. You'll also be given the opportunity to download the current Dogecoin blockchain from blockchains.download, a service we run, allowing you to get started with Dogecoin even faster. The blockchain can also be downloaded for use with local Dogecoin installs.