A new version of Mana Plus Portable has been released. The Mana World is a free and open source MMORPG (Massively multiplayer online role-playing game) game with the looks of "old-fashioned" 2D RPG games packaged as a portable app, so you can game while on the go. It's packaged in PortableApps.com Format so it can easily integrate with the PortableApps.com Platform. And it's open source and completely free. 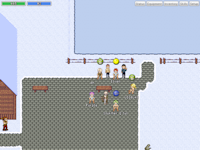 The Mana World aims to be a place for people to interact by fighting, doing quests, teaming up and forming a community. Quests will lead to other quests, which will make the player explore new places, experience new things and meet new people. Ultimately, players are not alone in The Mana World, and will (have to) interact with other players, which is a lot more fun then interacting with a computer. The Mana World shall be be a place with its own unique history, politics, culture, countries, tribes, climate, etc. Features include:

Learn more about The Mana World...