A new version of GPU-Z Portable has been released. GPU-Z is a lightweight system utility designed to provide vital information about your video card and graphics processor. It's packaged in PortableApps.com Format so it can easily integrate with the PortableApps.com Platform. GPU-Z Portable is freeware for business and personal use.

GPU-Z is packaged with permission from the publisher 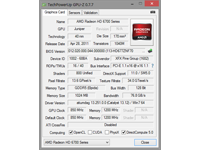 GPU-Z displays information about your adapter, GPU, and display including overclock, default clocks, 3D clocks, and more. It supports NVIDIA, ATI and Intel graphics devices. GPU-Z can even create a backup of your graphics card BIOS.