A new version of YUMI-UEFI Portable has been released. YUMI-UEFI (Your Universal Multiboot Integrator with UEFI support) can be used to create a Multiboot USB Flash Drive containing multiple operating systems, antivirus utilities, disc cloning, diagnostic tools, and more. It's packaged in PortableApps.com Format so it can easily integrate with the PortableApps.com Platform. And it's open source and completely free. 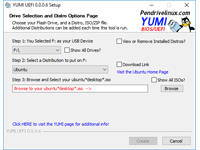 YUMI-UEFI (Your Universal Multiboot Integrator with UEFI support), is the successor to MultibootISOs. It can be used to create a Multiboot USB Flash Drive containing multiple operating systems, antivirus utilities, disc cloning, diagnostic tools, and more. YUMI uses syslinux to boot extracted distributions stored on the USB device, and reverts to using grub to Boot Multiple ISO files from USB, if necessary. Aside from a few distributions, all files are stored within the Multiboot or yumi folder (depending on version), making for a nicely organized Multiboot USB Drive that can still be used for other storage purposes. Note that YUMI is intended to be used to try to run various "LIVE Linux" Operating Systems from USB. Installing Linux from the YUMI created USB Drive to a Hard Drive is not officially supported. If the installer portion of any Live Linux distro does work, consider it a bonus.