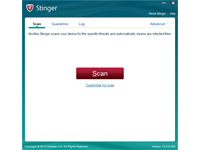 McAfee Stinger detects and removes prevalent Fake Alert malware and threats identified in the "List Viruses" section of the Stinger application. While not a replacement for full fledged antivirus software, Stinger is updated multiple times a week to include detection for newer Fake Alert variants and prevalent viruses.