A new version of Gramps Portable has been released. Gramps is a genealogy program that is both intuitive for hobbyists and feature-complete for professional genealogists. It's packaged in PortableApps.com Format so it can easily integrate with the PortableApps.com Platform. And it's open source and completely free. 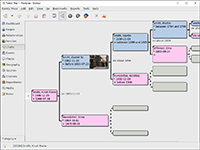 Version 5.0 and later of Gramps may not be able to import data from version 3.x automatically. If you upgraded from a previous version of Gramps, your old version was copied to a GrampsPortableLegacy directory alongside your upgraded one. You can open that version and export to Gramps XML format, then create a new family tree in Gramps 5.1 and import your data if you encounter issues.

is this still 32bit?

Read that the earlier release was created so they could continue to run Gramps on some aging WinXP boxes. Is this still a 32bit version of Gramps Portable? And will it run on XP?

This is the 32-bit build for maximum compatibility as people move around. It does not appear to support Windows XP.

That it is the 32bit is good to know!

An Italian new user was having problems getting GrampsPortable to run in his language. So I did some experiments and came up with the following:

Even though I choose Italian in the Installer, GrampsPortable still ran in English. (I do not know if the spellcheck Dictionary used the Italian version. It looked like the 'Enchant' was still pointed at the English. Certainly, the Italian dictionary and AFF file were still in the "myspell-all" folder rather than the "mysppell" folder. )

So I looked at the various settings files. In the [Language] section of the GrampsPortable settings, the "DefaultIfNotExists=" was still set to "en_US" (English, USA dialect). I searched for the Italian file and it was labeled "it_IT". Updating the settings file in a text editor (I used Notepad++) made GrampsPortable run in Italian.

The location of the settings file to update when installed on a USB drive mounted was drive letter "G:"

The setting file chunk to be updated:

Please don't use this news announcement for support questions.