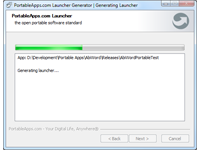 The PortableApps.com Launcher allows you to easily make your apps portable. It features:

For complete details, read the PortableApps.com Launcher Manual (also included with the app).

For creating portable apps, we recommend that you use the PortableApps.com Application Template 2.4 as a starting point.

Get Help Packaging for PortableApps.com

How to utilize the new (minor) features?

Both new options don't seem to be documented, can you detail here how to use them?

It advertises how to pin to the platform so you can pin the launcher generator. The Windows version check is just backporting code for Windows 8+ if you use custom code in your own PA.c Launcher.

How does it advertise it?

The platform defaults to now allowing taskbar pinning unless the app advertises to the platform that it supports it. Dual EXE apps will result in two different taskbar icons otherwise.