ScreenToGif Portable has been released. ScreenToGif is a screen, webcam, and sketchboard recorder and editor. It's packaged in PortableApps.com Format for easy use from any portable device and integration with the PortableApps.com Platform. And it's open source and completely free. 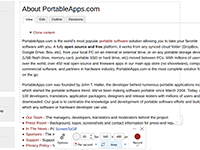 ScreenToGif is a screen, webcam, and integrated whiteboard recorder. It can select regions, windows, or entire screens to capture with an adjustable FPS. A complete editor is also included to then edit your capture and remove or reorder frames, add titles, draw, adjust framerate, and more. The result can be saved as a ScreenToGif project as well as exported to GIF, APNG, video, image, and more. ffmpeg is included for a wide variety of export options. Learn more about ScreenToGif...

Wow, looks nice! I must give it a try!