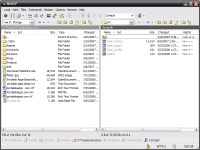 WinSCP Portable is a free SFTP, FTP and SCP client for Windows with lots of great features: