Puzzle Collection Portable is a collection of dozens of single-player puzzles all packaged together with an easy-to-use interface. 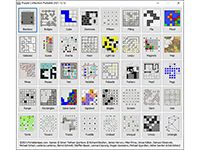 For help getting up and running, please read the following: