WinBoard Portable can run from a cloud folder, external drive, or local folder without installing into Windows. It's even better with the PortableApps.com Platform for easy installs and automatic updates. 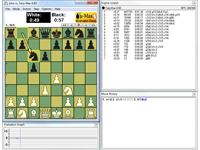 WinBoard is a graphical user interface for chess in all its major forms, including international chess, xiangqi (Chinese chess), shogi (Japanese chess) and Makruk, in addition to many minor variants such as Losers Chess, Crazyhouse, Chess960 and Capabanca Chess. It displays a chessboard on the screen, accepts moves made with the mouse, and loads and saves games in Portable Game Notation (PGN). It serves as a front-end for many different chess services, including: Chess engines that will run on your machine and play a game against you or help you analyze, such as GNU Chess, Crafty, or many others; Chess servers on the Internet, where you can connect to play chess with people from all over the world, watch other users play, or just hang out and chat; Correspondence chess played by electronic mail. The CMail program automates the tasks of parsing email from your opponent, playing his moves out on your board, and mailing your reply move after you've chosen it.