Mozilla Firefox, Portable Edition Legacy 52 can run from a cloud folder, external drive, or local folder without installing into Windows. It's even better with the PortableApps.com Platform for easy installs and automatic updates. 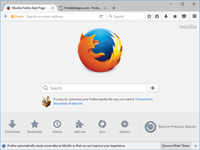 Mozilla Firefox® Portable Edition Legacy 52 is the final release of the 52.x branch of the Extended Support Release of the Mozilla Firefox web browser bundled with a PortableApps.com launcher as a portable app, so you can take your browser, bookmarks and passwords with you. It is intended for groups who deploy and maintain the desktop environment in large organizations such as universities and other schools, county or city governments and businesses and the developers who support them. Individual users should use standard Mozilla Firefox, Portable Edition. Mozilla Firefox® is a fast, full-featured web browser that's easy to use. It has lots of great features including popup-blocking, tabbed-browsing, integrated search, improved privacy features, automatic updating and more. Plus, thanks to the PortableApps.com launcher bundled in the Mozilla Firefox, Portable Edition, it leaves no personal information behind on the machine you run it on, so you can take your favorite browser along with all your favorite bookmarks and extensions with you wherever you go. Firefox Portable is a dual-mode 32-bit and 64-bit app, ensuring Firefox runs as fast as possible on every PC.