Apache OpenOffice Portable can run from a cloud folder, external drive, or local folder without installing into Windows. It's even better with the PortableApps.com Platform for easy installs and automatic updates. 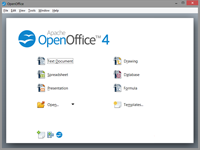 Apache OpenOffice Portable is a full-featured office suite that's compatible with Microsoft Office, Word Perfect, Lotus and other office applications. It's easy-to-use and feature-rich, performing nearly all of the functions you'd expect in an office suite, but at no cost.

Standard vs All Languages: The standard download includes support for English (US and GB), Arabic (if available), Chinese (Simplified and Traditional), French, German, Italian, Japanese, Korean, Portuguese (Brazilian and Portugal), Russian, and Spanish. The All Languages download includes all languages supported. The Portable App Directory app store built into the PortableApps.com Platform will automatically select the right download for you. An option during installation allows you to remove extra language templates, dictionaries, and other files to save you space.

Some Languages Unavailable: Due to the way Apache OpenOffice handles locales, some locales that are available from Apache are not available in this portable edition. Languages such as Gaelic and Tamil collide with other installed languages so they can not also be included. If you need access to one of the languages that is not included, please consider using LibreOffice Portable instead.