Chromium B.S.U. Portable can run from a cloud folder, external drive, or local folder without installing into Windows. It's even better with the PortableApps.com Platform for easy installs and automatic updates. 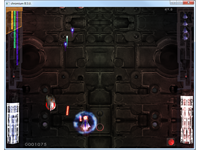 Chromium B.S.U. is a fast-paced, vertical scrolling space shooter with high-resolution graphics and sound effects. You are captain of the cargo ship Chromium B.S.U., responsible for delivering supplies to our troops on the front line. Your ship has a small fleet of robotic fighters which you control from the relative safety of the Chromium vessel. Do not let ANY enemy ships get past your fighters! Each enemy ship that makes it past the bottom of the screen will attack the Chromium, and you lose a fighter. Use your fighters as weapons! Crash into enemies to destroy them before they can get past you. Strategic suicide is a powerful tactic! When the Chromium launches a new fighter, it releases a high energy burst which destroys all enemies in range. Self-destruct to preserve your ammunition! A double-right-click will cause your current fighter to self-destruct. Before the ship blows up, it ejects its ammunition so that the next fighter can pick it up.