Opera Portable, Portable Edition can run from a cloud folder, external drive, or local folder without installing into Windows. It's even better with the PortableApps.com Platform for easy installs and automatic updates. 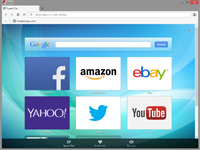 Opera is a fast and free browser with advanced bookmarking, search, and personalization options.