Opera GX Portable, Portable Edition can run from a cloud folder, external drive, or local folder without installing into Windows. It's even better with the PortableApps.com Platform for easy installs and automatic updates. 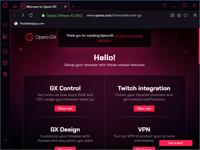 Opera GX is a special version of the Opera browser built specifically to complement gaming. The browser includes unique features to help you get the most out of both gaming and browsing. Need every ounce of power your machine can give you? No need to close your browser. GX Control lets you set limits on how much RAM, CPU and network usage your browser takes up. The Network limiter allows you to set maximum limits (upload and download) on how much of your network’s bandwidth you would like to devote to your browser. Opera GX will stick to that limit, which means your game or streaming service outside of the browser will run more smoothly with the larger network bandwidth at its disposal. Also includes a RAM and CPU limiter, gaming themes, and more.